In the 19th Century, the local courthouse played an important social, economic, and legal role in the community. Most male citizens traveled to this locale several times a year: to pay taxes, dispute bills or land surveys, register property, and socialize with rarely seen residents.

Local maps included this central location, usually with the abbreviation “C.H.” The excerpt above is from an 1864 map of Amherst. If you look closely you will see the Orange & Alexandria Railroad tracks and two of the “gaps” that led to the west. 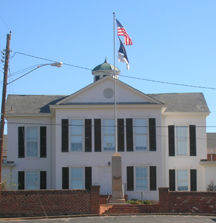 In the past, most courthouses were part of a larger precinct that included the county jail, lawyer’s offices, and an inn or tavern. In Amherst, the courthouse square originally included a hospital (later converted to a church), a prison, a post office, and the courthouse itself. The building was erected in 1870 and added on to in 1970 (the modern courthouse around the back of this building, not visible in the photo). A Civil War monument was placed in front of the old courthouse in 1922. A section of railing from the original courthouse was added to the second floor of the new courthouse. Allegedly this railing contains eight notches that correspond to the number of hangings conducted in front of the original courthouse.