Last week’s post provided the historic context for the large African American population that lived in Amherst County, Virginia. But families and individuals should not be reduced to numbers. In this post we review the life of a interesting woman: Signora Hollins. Signora was born in either 1861 or 1864, during the Civil War.

Signora first arrived at Sweet Briar around 1874 when her aunt was hired as the cook for Indiana Williams’ household (at Sweet Briar House). As a young girl on a rural farm Signora quickly befriended her only contemporary: Daisy Williams (Indiana’s daughter). Many decades later Signora remembered playing with Daisy on the farm which she described as “thick woods everywhere except for the garden and the landscaped grounds immediately surrounding Sweet Briar House. An iron gate at the entrance into the grounds was guarded by a dog so fierce that he had to be caged whenever visitors came, which was not often” (quoted from Stohlman, The Story of Sweet Briar College, p. 28). Sometime in her teens, Signora went north to live with relatives. She returned to Amherst a decade or so later and married Bias Hollins in 1890 (when she was about 22). 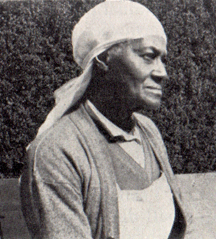 Between 1890 and 1910 Signora had 6 children, none of whom survived. In 1910 she and Bias were living in Amherst, together with a relative, Mary Rucker, and her 3 children. By 1920, Signora was widowed and had moved to her brother’s house in Elon where she worked as a cook for an Amherst family. 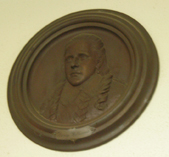 In 1931 Signora was asked to participate in a cornerstone ceremony for the newly built Daisy Williams Gymnasium. In honor of the occasion, she contributed a book that Daisy had given her to the Cochran Library. On the eve of this event the mysterious “Daisy medallion” was re-discovered in a closet by a housekeeper, just in time to hang it in the new gym. Two decades later, in the summer of 1954,  Signora died.