In recognition and honor of Barack Obama’s recent victory, I wanted to turn to local achievements and highlight a few examples of African-American leadership in Charlottesville’s past. Obama’s historic victory rests on the struggle and hard work of centuries of African-Americans. At the national level we can point to the success of such diverse individuals as Booker T. Washington, Bille Holiday, W.E.B. DuBois, Zora Neale Hurston, and Martin Luther King, Jr. Here in Charlottesville we salute the contributions of lesser known, but locally significant citizens.

One such individual is Benjamin Tonsler (1854-1917), a teacher and principal at the Jefferson Graded School for almost three decades. 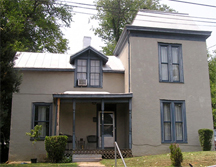 Born enslaved, Tonsler attended the Hampton Institute before returning to Charlottesville. As reported on the African American Heritage program website, “He took personal risks in order to help many African-American students gain an education beyond the legal eighth grade during segregation, teaching advanced texts after school. Tonsler was also a friend of Booker T. Washington and played an important role in Charlottesville’s civil rights movement.” He is buried in the Daughter of Zion’s Cemetery (across from Oakwood) and the nearby Park is named after him. His ca. 1879 house, located at 327 6th Street SW, is listed on the Virginia Landmarks Register. Click on the link to read more about this house.

Another remarkable local resident was Mrs Rebecca McGinnis (1892-2000). Living to age 107, she was descended from an enslaved family that lived at the Chestnut Grove Plantation. She graduated from Hampton University, taught school in Charlottesville (1915-1960), and fought for civil rights. During her long life she witnessed many historic changes, one of which she describes here, “… when I was a youngster, black and white lived together. We didn’t have all the segregation like we had in the later years. After they passed what they called the Massenberg bill, that’s called the Jim Crow bill, then they moved all the blacks out from the whites and the whites from the blacks, because where I used to live, whites used to live right across the street from where we lived. Children used to play all together…But when they passed that Massenberg bill, that’s what it was called, forever it was called the Jim Crow law. “

John Mays (1862-1923) founded the first African-American newspaper in Charlottesville: the Charlottesville Messenger. Born in slavery he triumphed despite limited educational opportunities in Jim Crow Virginia and dedicated his professional career to providing information to the black community through his paper (published in the 1910s and 1920s).

Other successful black business people include Mr. and Mrs Inge.

George Inge arrived in Charlottesville in 1891, planning to teach school. After he discovered that the opportunities for black teachers were limited he opened a store at 333 West Main St. The Inge’s grocery closed in 1978 after 87 years in operation. The building still stands but was more recently known as “Awful Arthur’s Seafood” and, today, the “West Main” Restaurant. Mr. Inge was a successful grocer who supplied the city and university with fresh produce and seafood. His wife was famous for crafting hand-churned butter into elegant shapes. Their children carried this success to the next generation becoming teachers (5 sons and daughters), medical doctors (2 sons), scientists (1 son), and a realtor.

This brief list provides a small window into the contributions of the African American community. To read more about the accomplishments of the historic African American community in Charlottesville, take a look at Agnes Cross-White’s book titled, “Charlottesville: An African-American Community” (Arcadia Publishing 1998). Or stroll through one of Charlottesville’s historic black cemeteries to read about individuals lives as memorialized on gravestones.For example, view the on-line walking tour of the Daughter’s of Zion Cemetery.

For a local discussion of the election results please see the announcement below:

The Carter G. Woodson Institute invites you to attend the next installment of the Currents in Conversation series: “2008: An Election Post-Mortem”. DATE AND TIME:  Thursday November 6, 2008 at 7:30pm LOCATION:  108 Clark Hall