Freemasonry emerged from the craft guilds of stone masons during the Middle Ages. This “secret society” became very popular in Colonial America and many of the founding fathers belonged to Masonic Societies, including George Washington, Benjamin Franklin, and John Paul Jones (no, not the same eponymous individual who named the JPJ Arena here in C-ville; that John P. was a 1948 graduate of UVA Law). The Masonic Service Association website defines the organization as “a worldwide fraternity emphasizing personal study, self-improvement, and social betterment via individual involvement and philanthropy.”

Originally, these organizations were limited to men. But in the 19th Century several orders were created for women: The Order of the Eastern Star (1855), the Order of the Amaranth (1873), and the White Shrine of Jerusalem (1894). Often an individual’s membership in these groups was symbolized on their gravestone. 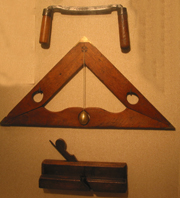 The three symbols commonly used in these motifs include a carpenter’s t-square (for measuring accurate right angles), a compass (for drawing circles, not for navigating), and the letter “G” which is variously interpreted as “God,” “Geometry,” or “Grand Architect of the Universe” (also a reference to a higher power). The second photo illustrates Colonial Era tools used by builders and carpenters. 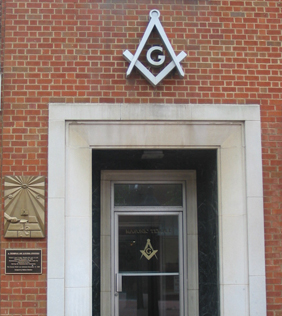 and the Charlottesville Commandry, No. 3 (which gave up on the celestial planning and settled for the “second Tuesday in each month.” The photo depicts one of the lodges today, located along the downtown mall. Stop by and study the symbolism in the various signs. Above the door is the classic triad. To the left of the door is a 3-D drawing that references the pyramids of Egypt (another important symbol for the group and the source of the “all-seeing” eye above the pyramid on the dollar bill). The detailed symbol on the glass door will make it easier to identify the symbolism of the T-square and compass.