A couple years ago I visited an unmarked graveyard off Route 22.

Today located on private property, adjacent to a 20th Century house, the fieldstones in the graveyard dated to an earlier period. The un-inscribed stones suggested an informal, family graveyard, most likely used by individuals who could not afford mass-produced markers. With no names or dates, I filed the cemetery away for later research (such as deed and census analysis to try to figure out who owned the land 100+ years ago).

More recently, I saw an intriguing advertisement for a house (MLS 437142) located only half-a-mile from the old graveyard.

The description caught my attention: “Albert Johnson was a freed slave who obtained this property from the Meriwether and Randolph families. Construction started in 1882 with the western-most portion (one over one over one with access via rope ladders). The eastern portion was build in 1889.” I turned to UVA architectural historian emeritus, K. Edward Lay, to learn more. He had studied the house as part of his research into historic homes in Albemarle County (see his book for more information: The Architecture of Jefferson County). According to Professor Lay, Albert Johnson was a black carpenter living on land given to Blacks after Civil War. In the 1880 Census, Albert Johnson is listed as age 35 (born in slavery, around 1845), married to Amity Johnson (also 35) and living with their six children and one other boy (possibly a relative, Jesse Spencer, age 17).

Further inquiries with neighbors, Mrs. G. and Sara Lee Barnes, revealed that at some point between the first and second quarter of the 20th century the house was purchased by a white family named Dowell. For much of the 20th Century, Mrs. Dowell and her children lived very simply in the house. Mrs Dowell lived to be over one hundred years old. After her death, her daughter Lyndell stayed in the house for some years. After she was no longer able to take care of herself, the house was sold out of the family.

The kitchen contains logs said to have come from Monticello or possibly Shadwell (Mr Johnson once lived and worked at the former). A modern bathroom was tacked on at the rear of the house sometime in the 20th century (seen in the photo below). 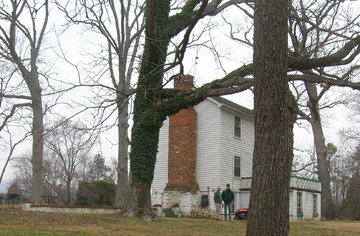 The beautiful oaks in the yard were planted by Mr. Johnson. So while the house lacks central heat or air, it retains the beauty of past craftsmanship (only slightly obscured by cheap paneling and carpeting). Ms Barnes commented that this was one of three homes in the immediate vicinity that were originally built by freed slaves for their families. One (or all) of these homes may have used the graveyard located nearby. Located off busy Route 22 in Keswick, this is the house that time forgot. Hopefully it will be bought and restored, rather than torn down.