After recently apologizing for slavery, the University of Virginia created a committee charged with researching the enslaved and Free Black community at the university. Although these individuals are not (yet) featured prominently in histories of “Mr Jefferson’s University,” they provided much of the labor that constructed the original buildings, ca. 1819-1828. And, up until Emancipation, many professors and students lived with enslaved individuals on grounds. In addition, throughout the 19th Century, the university was surrounded by several African-American neighborhoods (e.g., Canada, located south of Cabell Hall and the site of the Foster House and Cemetery).

Memorials to the African-American community are scattered throughout grounds.

One example is the “crackerbox” (allegedly named after 19th Century students from Georgia who were called “crackers”). This small building, located behind Hotel F, has a rich oral history including references to a bordello, a 19th-kitchen, a woodshed, “the smallest dormitory in the United States,” and, quite possibly, slave quarters. 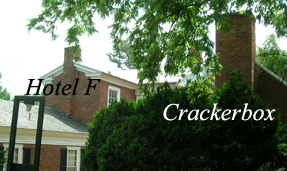 For a fascinating discussion of other campus buildings that may have been used by slaves or post-bellum servants, visit Jim Cocola’s on-line essay titled The Ideological Spaces of the Academical Village: A Reading of the Central Grounds at the University of Virginia.

The newly formed university committee that is researching this forgotten history is hoping to compile any and all documents, oral histories, photographs, or family geneologies that relate to the enslaved and Free Black community at the university. A website dedicated to this project will be posted this summer. If you have information on this topic, please consider contributing it so that it can be compiled into formal accounts of the history of the university.